On December 1st 2019, Robert Swan OBE started his 300-mile journey to the South Pole to raise awareness for the continued preservation of Antarctica. His goal was to complete a journey he started 35 years ago. Robert flew a Panaseer flag at the South Pole so we could share in his unique message. 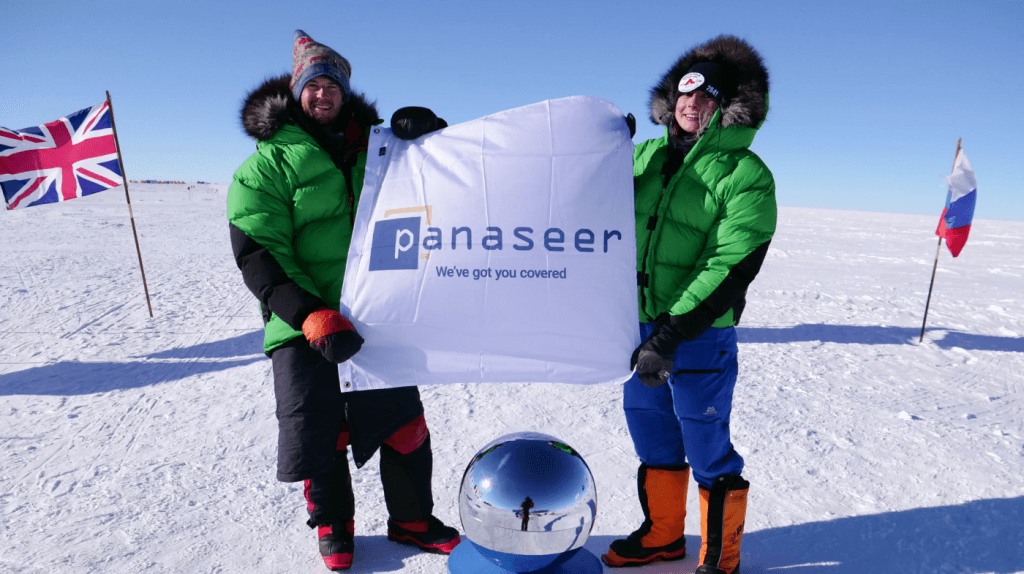 Robert Swan is one of those people that can’t help but inspire those around him. His mission and his goals are both aspirational and inspirational. In 1989, Rob became the first person to walk to both poles.

Last year, the Panaseer team was lucky enough to welcome Rob to our office where he spoke to us about his life-long mission to preserve Antarctica. For context, you might want to check out his TED Talk from a few years ago, where he talks about the 2041 mission. This involves his fascination with the old explorers, particularly Scott; the overwhelming challenges he and his teams faced when they walked 1,400 km to the South Pole in 1987; his journey to the North Pole two years later; the dangers of climate change; and how those treks inspired him to devote his life to the preservation of the last ‘beautiful, pristine place left alone on Earth’.

Since that talk, Rob has continued. In 2017 he undertook another challenge to walk again to the South Pole, but this time entirely using renewable energy — the fuel they used and sustainably sourced equipment and supplies. Unfortunately, on this trek, Rob’s hip disintegrated 300 miles from the end of the journey, and he was forced to stop.

But, after two years of recovery, Rob returned in December 2019 for another attempt at the last 300 miles.


Though Rob had made this journey before, his previous injury and the challenges he faced meant he was afraid — ‘I’m frightened of what lies ahead’. In the Antarctic, there is always the danger of ‘the white darkness’, where visibility is zero, and any misstep could potentially lead to disaster. But he continued with a message that resonates — ‘I think I can do this’. His perseverance, commitment, and determination helped him to continue, and to try his very best.

In the end, he fell 40 miles short after another hip injury, but he assures us he will be back to complete the final leg in 2021: ‘It’s not an easy thing to do, but I’m still in the ring’.

When Rob came to see us last year, we were inspired by his mission and took steps to support him, whether donating to his charity or taking simple actions within the office to be more eco-friendly (recycle more effectively, turn down the heating, not wasting power, etc).

We are proud to support his charity, the 2041 Foundation, and we are looking forward to his next mission.